After spending the night in the Akema hotel in Saumur, Wednesday 12 August was to be the hottest and most humid day of the trip. We had a good breakfast in the hotel and set off again for an interesting day going the furthest south during this trip. We passed by an medieval walled town Saint Jean de Thouers with a chateau overlooking it.
We travelled through much countryside and reached Ponthaney, a reasonable size town where we stopped for coffee. I went to a pavement cafe overlooking a square with Steve Barnado and Tim Kingcott. We also explored a memorial park. Our journey continued by the Thouet river and we stopped to have a cuppa tea on the bus in the middle of the countryside near to a village Beauvoir sur Niort.
We arrived in the town Cognac. The drink we call 'brandy' is also known as 'cognac' in French after the name of this town where brandy is distilled from grapes grown in this region. As we arrived we saw some of the famous names like 'Hennessey'
We were allowed about three hours in the town to explore, we had a beer in a cafe/bar in the main square, after having to shelter from a very heavy rain shower. Later I had a kebab dinner.
When we were all back on the bus we travelled the relative short distance to a small village Jarnac-le-Champagne, where the Church dominates the village. Our accommodation was the family run Le relais de Jarnac-Champagne. The local boulangerie is also run by the same family. When we arrived in the village it appeared everyone knew we were coming as we received a very warm welcome. Everyone had a camera or camera-phone and were taking photos of the bus. Although not normally open late evening the family opened the baker and general store and we were able to buy some drinks and light snacks.
www.lerelaisjarnacchampagne.fr
As it was so warm we sat outside for as long as possible. The village church bell rang every hour until 11pm. The night started hot and sultry but at times when I was woken the wind had picked up and more heavy rain fell.

The Tuesday, 11 August turned out to be a very hot and sticky day. After our breakfast at the BRIT hotel in Blois, we set off to explore the Loire Valley. Many famous French noblemen built beautiful châteaux and during the day we visited Chambord, Chenonceau & Villandry.
We first called in to see the Château Chambord from the extensive grounds, and took some photos, including a group photo. The château was built for François 1st & features a double helix staircase. We also stopped for a coffee in the grounds of this chateau. Unfortunately the cafe area was plagued with wasps which spoiled our relaxation time.

After exploring the gardens we continued our journey to Chenonceau, a small town with a railway station and a château. A part of the château projects over the river. Unfortunately we could not access the château grounds as the area was fenced off,  and due to time constraints we could only visit the small town of Chenonceau. I was with one of the group and we found a small restaurant/cafe and had a cool drink.


Our overnight stay was in Saumur but we stopped in Chinon sur Loire for our evening meal and I a plat de jour dinner at the cafe des Belles Artes.
Posted by Jon at 13:22 No comments:

After my first night in France. I had my breakfast in the hotel dining room where I met most of our group. The breakfasts we had were "continental" and normally comprised of a selection of bread & rolls, fruit, cheese, jam, fruit juice and tea and coffee. The first breakfast, like the hotel, was poor in quality. We did not touch the fruit which looked like it had seen better days.
Rocky the Routemaster was parked outside. Rocky was our mode of transport. Each day we travelled through a part of France, taking in places of interest, sometimes these were planned, other times when we saw a cafe (and it was "coffee" time) we parked the bus and joined the locals. At the end of each day we stopped for our evening meal at a town near to the hotel, booked for that evening. Often it was late in the evening when we arrived, and almost time to go to bed. During the the next 13 days I learned a lot about the French way of life, and the way they served (or did not serve) lunches and drinks in the evening.
The day of the 10th August was very warm with sunshine. The morning at this stage of the holiday was the best part of the day.
After leaving Cergy, we travelled along along country roads which pass through smaller towns and villages. This so where we saw real French life. During the bus journey we noticed many of the locals turning their heads and even taking out mobile phones and cameras to photograph our bus. We made regular comfort stops and bought water for the journey.
After about three hours we stopped in a village, Digny where we had a coffee in a typical French cafe bar called Le Merle Bleu. It was a great opportunity to practice my now rusty schoolboy French.

We passed by Connere where there is a steam railway, but we were heading for Le Mans.
I think everyone associates Le Mans with motor racing. Indeed the race track and museum are just outside the town. For many years there has been the Le Mans 24 race for racing-cars, but also there are motor cycle and saloon car events.
The museum houses almost every type of car that has participated in the 24 hour race, and the rooms were full of fine examples of cars from early 1900s to the present day. There is plenty of material to read about the cars as well as the people behind the racing teams. The late actor Steve McQueen was also featured as he was also keen on motor sport as well as acting.


There museum also has a well stocked shop and a cafe serving drinks and light snacks.
Le Mans not only has the race track and museum, but the town also has a modern tramway. Adam drove the bus to the out of town terminus where we saw and photographed a tram and several motor-buses. From the bus we also saw the tram depot.

We then carried on with our journey as we need to reach Blois where our next hotel was booked the night.
Blois is a historic town on the river Loire, and it also has its own château. We stopped in the town centre so we could have our supper. Some of us chose La Duchesse Anne, a small bistro with seating outside. This bistro like many French cafe, bars and restaurants offers a good value "Plat de jour" a dish of the day which is usually a three course meal. This evening I had a beer, a salad, a beef fillet steak main course and apple tart (tarte aux pommes)

After supper we returned to the bus and we started talking with a group from Poland who were travelling through France by a modern coach.
Blois is a pretty town, but our hotel like most is "out of town" and is a hotel attached the BRIT Group and these hotels I found were among the best we stayed in as the rooms had quality air-conditioning and free WiFi.
Posted by Jon at 15:54 1 comment:

Bonjour
In August I joined a group of enthusiasts who were touring France. The tour was in Central and Western France. The mode of transport was Adam Conner's 1965 Routemaster. Adam had already successfully toured Scotland in 2013 and Ireland in 2014.
Unfortunately due to work I was unable to join the tour the tour at the start, but I was able to meet the group departing Reading on Friday 7 August on a sunny morning, and Adam kindly allowed me to put my rucksack on the bus, saving me carrying it around on the following Sunday when I met the group in Versailles.
Early on the Sunday morning 9 August I caught the 10.24 Eurostar from London St Pancras to Paris Gare du Nord. The day was hot and quite muggy. From Gare du Nord I travelled by Metro to Gare Montparnasse. While walking through the station to catch a regional train I met Ruby Landen who is an American singer-songwriter and Ruby was busking. We had a little chat, then I bought Ruby's CD which she was selling. Her music is blues-folk and is very pleasant. However while busking Ruby played a Sam Cooke classic.
(Photo of Ruby Landen)
I took the regional train to Versailles' one of many stations and walked along the quiet streets to the Palace of Versailles. As it was August many of the shops were closed as the owners like many Parisians take their annual holiday.
When I arrived at the palace the queues to enter the palace were very long, but I had been in touch with Adam and we arranged to visit the gardens. The gardens are extensive and full of statues, fountains and lawns. I soon found Adam and the rest of the group and I stayed with the group for the rest of the afternoon. 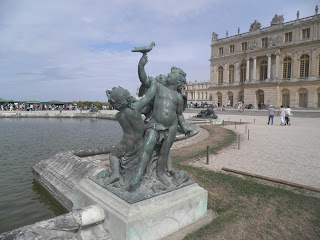 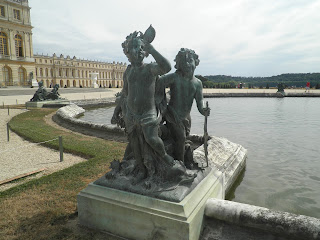 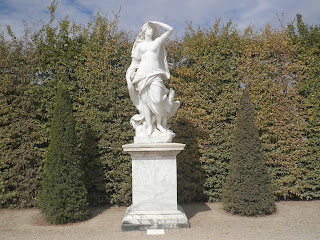 After spending a couple of hours we all walked into the town and found a cafe with outdoor seating. This cafe was the Pizzeria Capri. 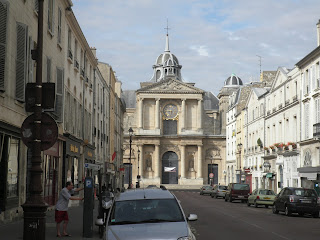 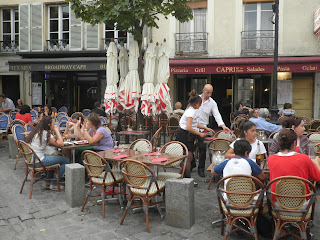 We were made very welcome by the a young waitress called Nanou who attended to us while we had our supper.
I had a cabonara and a large cup of cherry flavoured ice cream sundae. I also had a glass of Kronenbourg later.
After supper we took a train to La Defence and an RER suburban service to Clergy

Adam had already booked the hotels and this hotel was part of the group Balladines. However this hotel was not to the standard we expected. The hotel was 'tired' musty and their was no air-conditioning. I was meant to be sharing but the room I was allocated to share was a 'double' my co-guest asked for a twin. He was given a double and as the staff did not bother to swap we both had a double room each.