My weekend by Bodensee part 2 Day with Hannah

On the Sunday 13th January 2013, after breakfast in the hostel I took a train from Friedrichshafen Ost to the Stadt station where I met Hannah. Hannah suggested we should go to :Lindau. However on the way we stopped for a short break in Kressbon, a small village and we had coffee & cherry & pear cake in Le Picher, a little coffee shop. Here are two photos I took in Kressbon 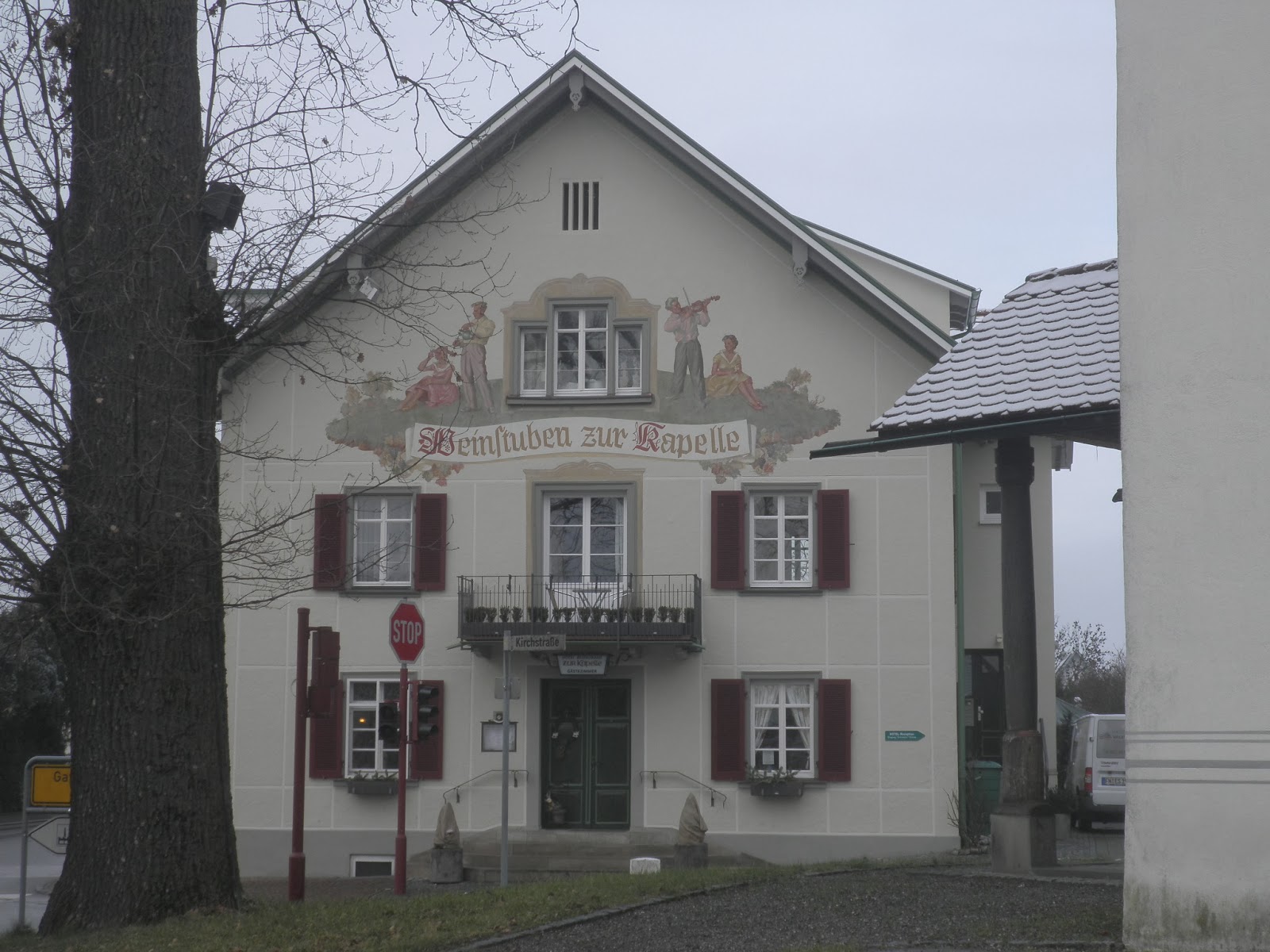 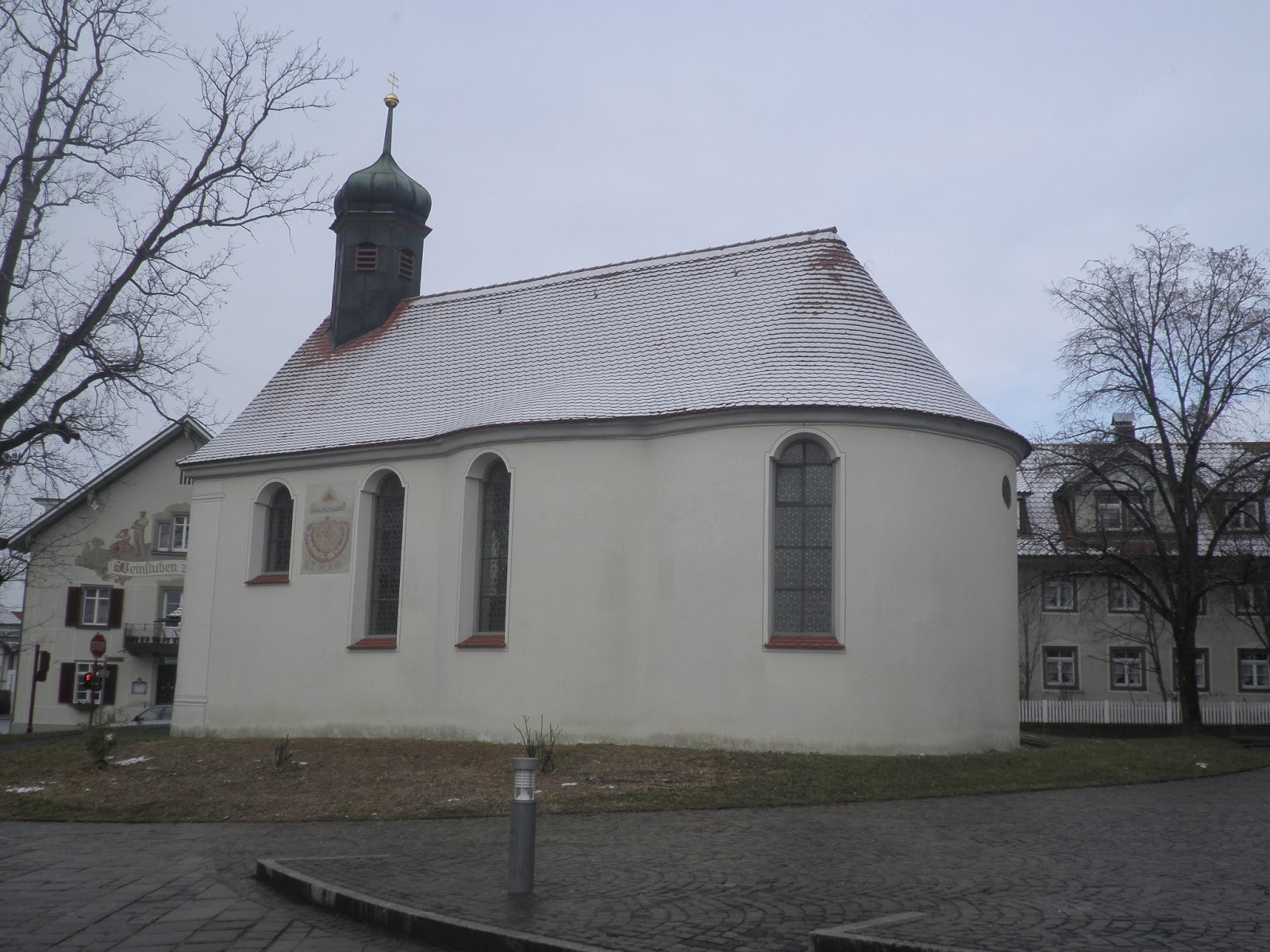 We continued our journey to Lindau which is in Bavaria, and very close to the Austrian border. The Altstadt & harbour are an island (Insel) and connected to the main land by the road bridge, Seabruecke and Eisenbahndamm for pedestrians and cyclists. When we arrived we walked to the look at the harbour whose entrance has the lion of Bavaria on one side and a lighthouse (Neuer Leuchtturm). 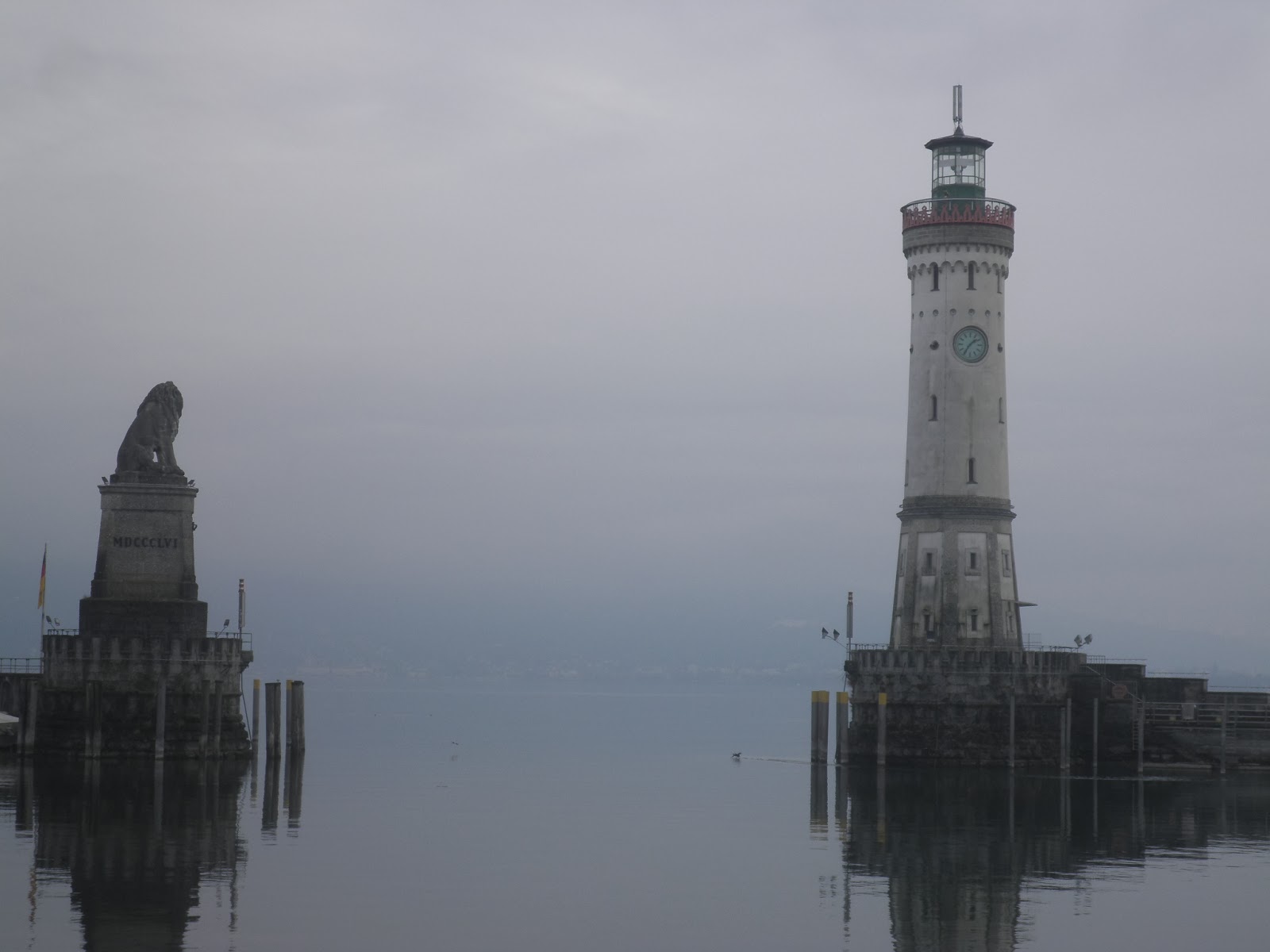 Hannah & I took a walk to the Altstadt, with the step gabled Rathaus (Town hall),  Peterskirche & Diebsturm (Brigend's tower). 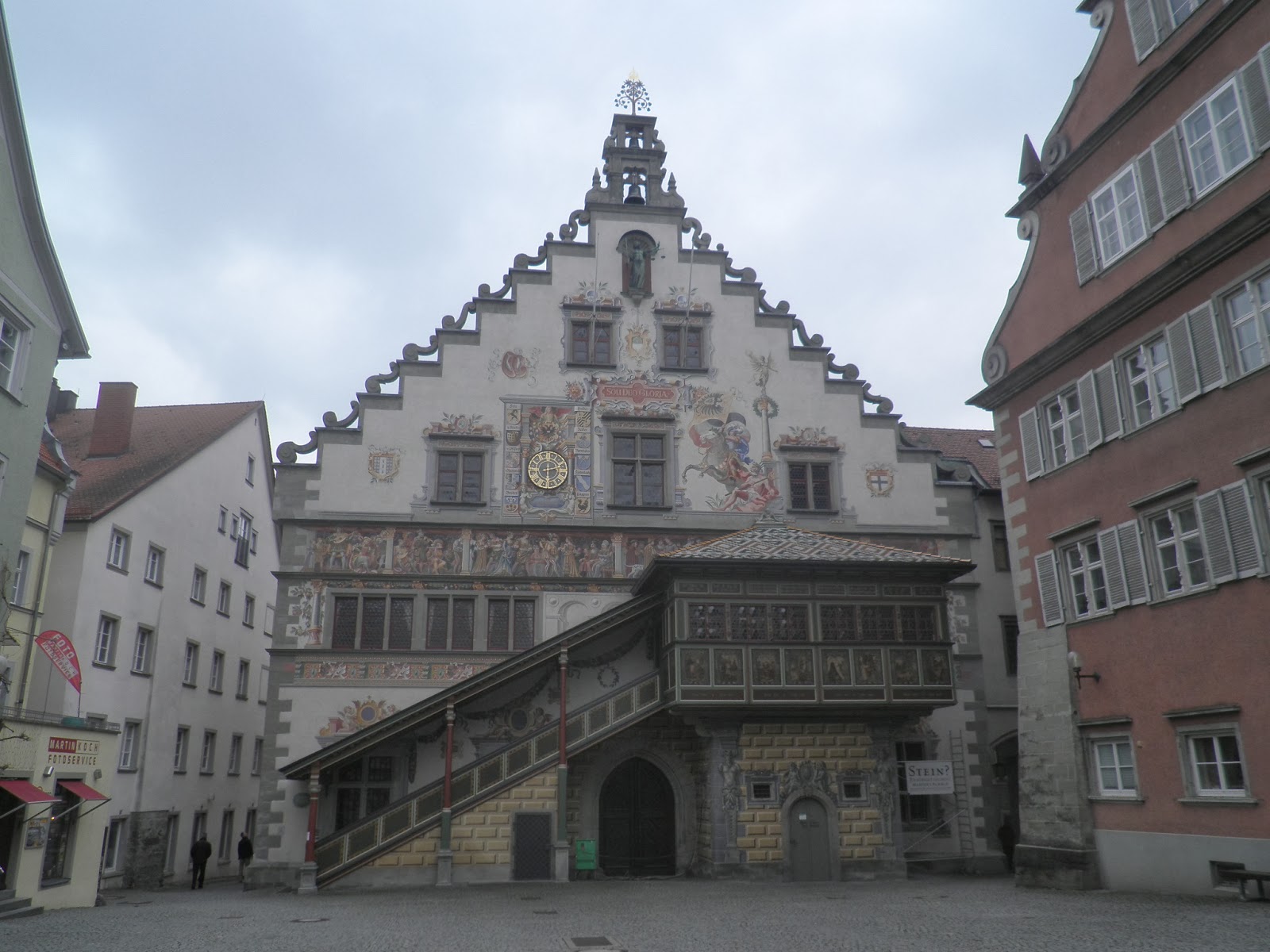 We had some lunch (pizza & tea) in Baeckerei Buerklin in Maximillian Strasse.
In the evening Hannah had arranged to see a film in a another town Ravensburg, a town now famous for its jigsaw puzzles. As Hannah had some time before she needed to go to the cinema we were able to explore the medieval fortified town centre. We climbed the steep staircase from the white Mehlsack (Flour sack) Tower to Veitsburg, a baroque castle, from where we admired the views of the Ravensburg. 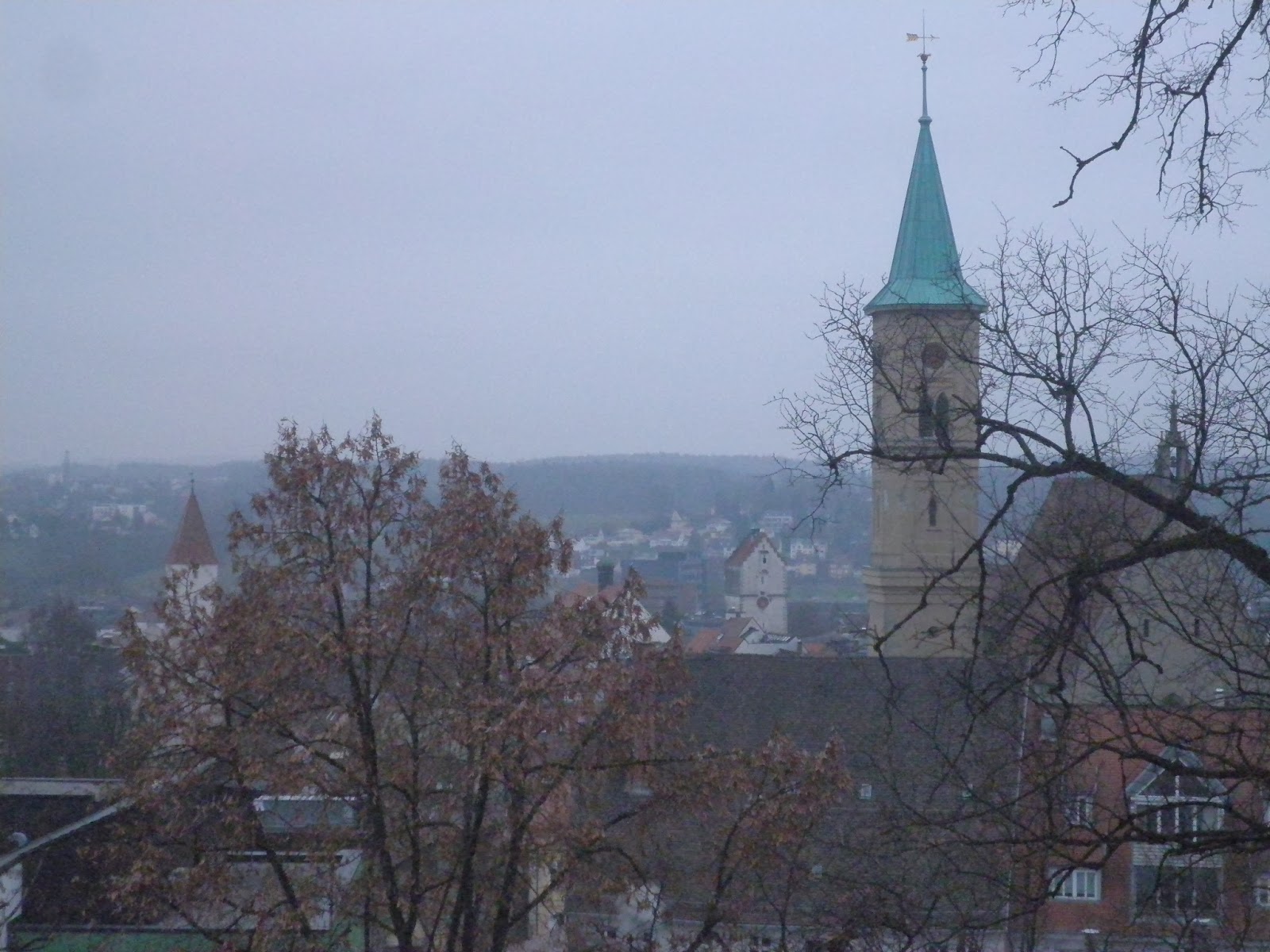 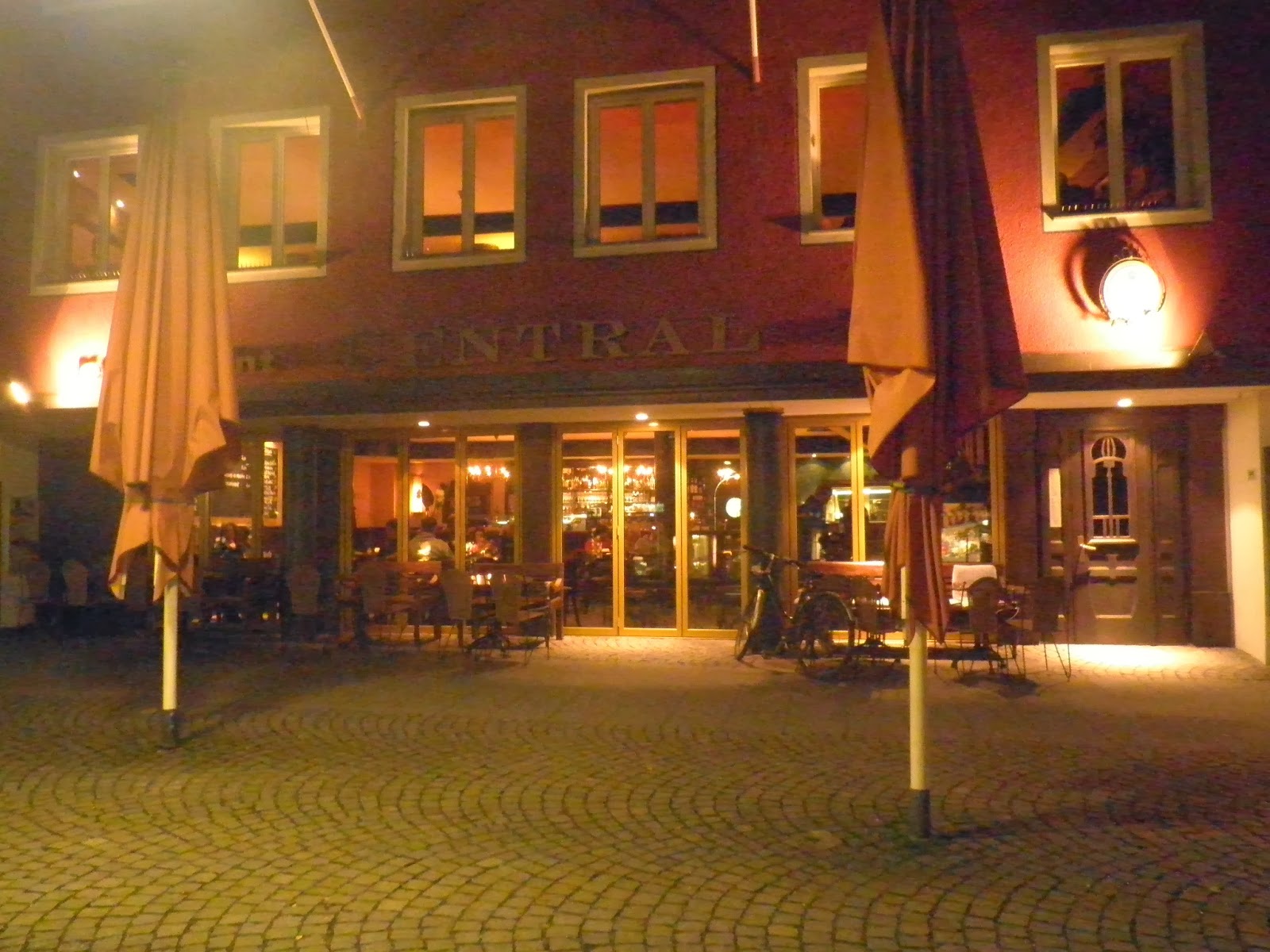 After I left Hannah at the cinema, unfortunately the film was only in German, I went to Marianplatz to find a bar-restaurant and had chicken fricasse, Leibinger bier in a typical German bar  called Cafebar Central.
After dinner I took the 18.52 train to Friedrichshafen Stadt & spent the evning walking around the harbour area, I had a beer in the station bar & took a train back to friedrichshafen Ost, from where I returned to the hostel,
Posted by Jon at 11:37 No comments:

My first day in Cyprus & a day away from it all

I arrived in Polis around 6pm on Sunday, when it was too dark to see much of the town, and so after having breakfast in the apartment-hotel and calling in to the bank (to change currency) I took a local 622 bus to visit the baths of Aphrodite. There were English & Bulgarian tourists on the bus with me & when we arrived we all walked through a botanical garden to a small pool with water falling like a shower, which is according to legend the pool where the goddess bathed before she took her walk to Regina's castle & monastery. Many photos are taken at the spot, but bathing in the pool is not allowed. Visitors can walk the route to Regina's castle which is now a ruin, there is still an oak tree and a natural drinking fountain and the route is well sign posted. While walking, the sun was shining and it was warm & pleasant. I met a couple Michael & Carol from Ireland, who showed me Aphrodite's walk which also took us over the cliff top. Here we had a short break and had a little snack & drink. 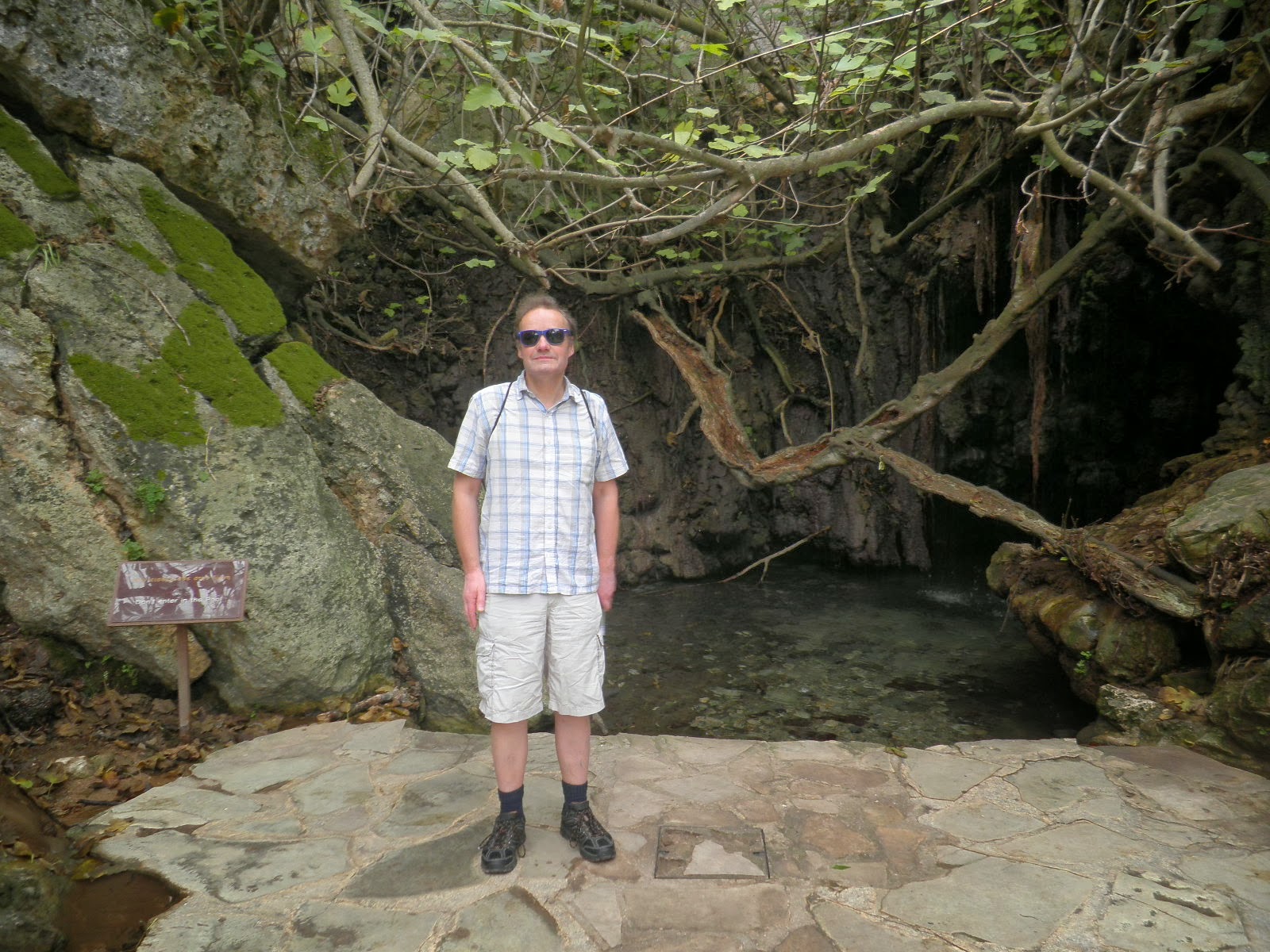 After the walk I joined Michael & Carol who offered me a lift to Lakki (Latchi) a former fishing harbour, but now a place where there are bars and restaurants (many specialising in sea food) and we had our lunch in the Faros (lighthouse) bar and sat outside overlooking the sea. I had a jacket potato with cheese & salad & Keo beer. 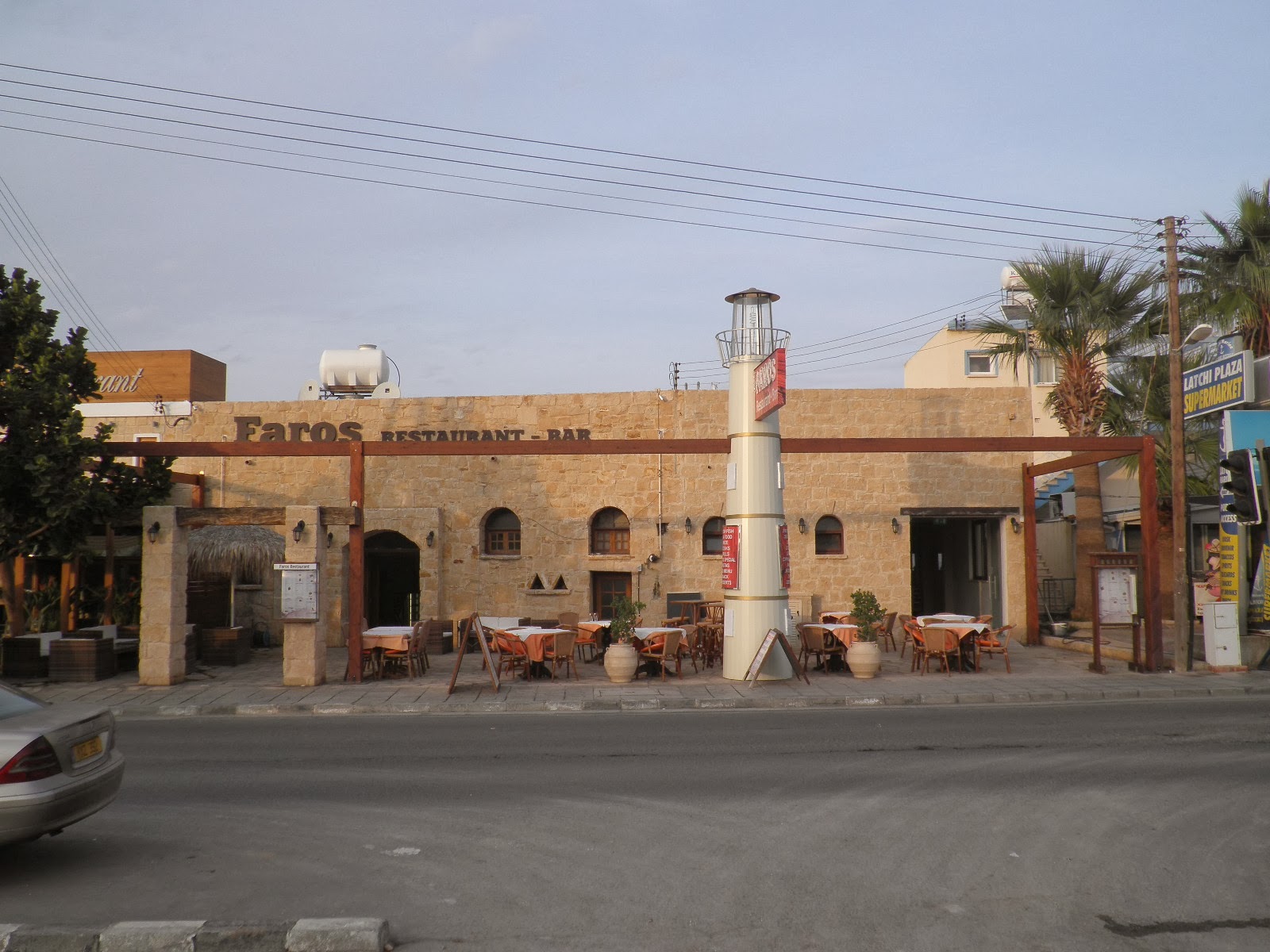 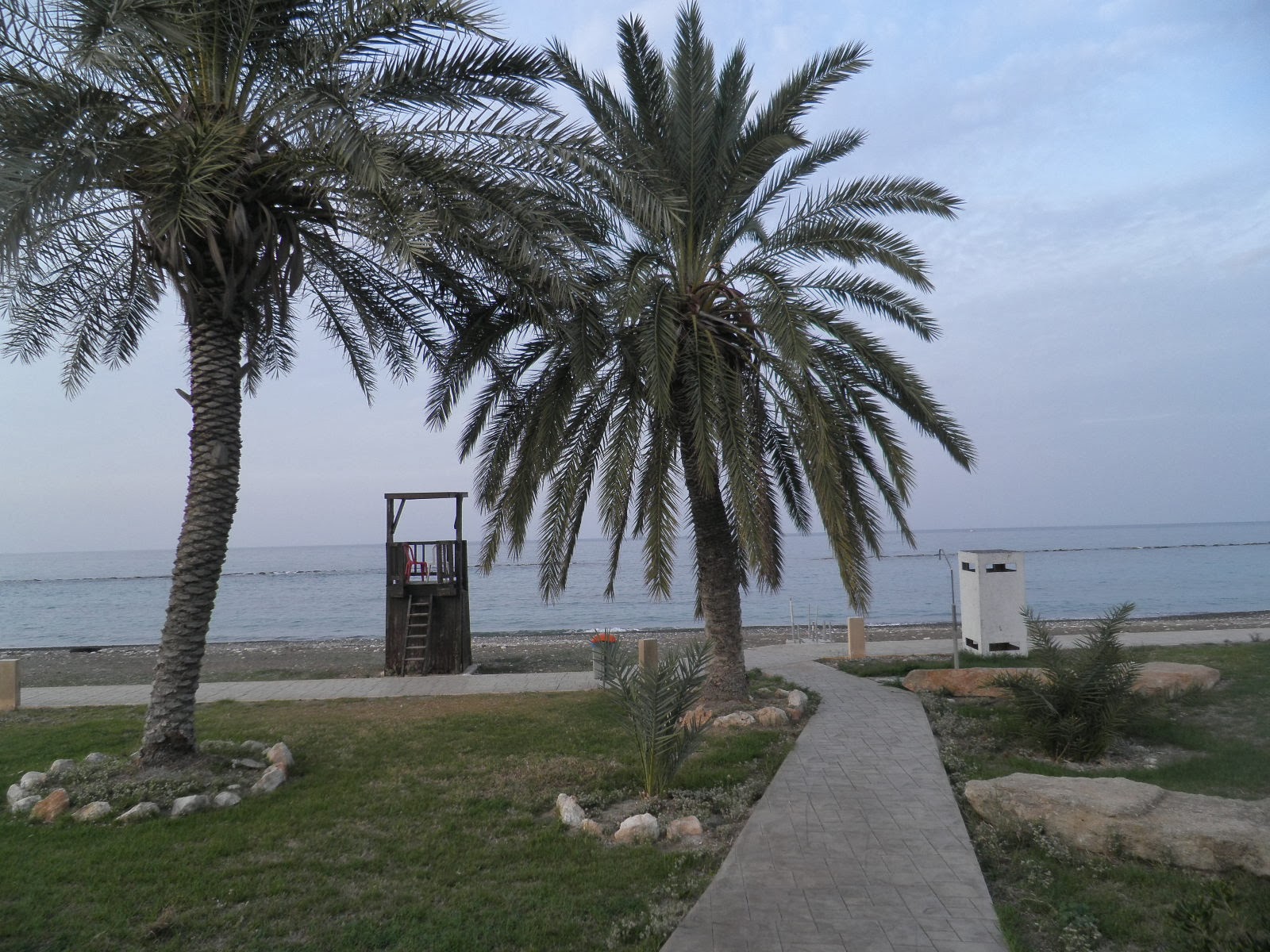 and then back to my apartment where I stayed for the evening.
Posted by Jon at 11:09 No comments:

In November 2013 I had a week off and decided I would visit Cyprus, the weather in England was cold & wet, the weather in Cyprus is usually warm & sunny with daytime temperatures reaching about 21-23 degrees Celsius. Easy Jet fly to Paphos from London Gatwick, with the flight departing about 07.30. I had decided to stay the night in Masslink Guest House in Horley. As part of the service the guest house offer a taxi to the airport, so I was refreshed for the day ahead.

After the flight we arrived in Paphos at 14.05, and went outside  to catch the 612 bus at 14.35 to Paphos harbour bus station, and I soon realised the scenery & architecture was so different to that in England. Pahphos has relics from pre-Roman, Roman, Colonial & modern times. I need to get another bus (618) to the Karavella Bus station where I had to wait for a bus to get me to Polis Chrysochous  (a 645 due at 17.00). However the sun was shining and I spoke with a German traveller (going to Nicosia) while I was waiting for the bus.
The 645 was a large coach, and many working people also joined the bus with me. Cyprus bus services are subsidised and each journey is 1 Euro 50, including the 30 km trip to Polis. Journey time about 56 minutes. When I arrived the owner of the Mariela hotel met me and he drove me to the hotel and I checked in with him, while I had a glass of beer and a piece of cake. I had an apartment which included a kitchen/bedroom/living room and an ensuite bathroom. I went in to the town and tried to find somehwere to buy some supper, but decided as there was nothing suitable opened I bought some bread, Tea, milk and beer from a local supermarket (just before it closed). In my apartment I also had a TV, which had some English speaking & music channels and wi-fi.
Posted by Jon at 19:23 No comments:

In January 2013, my niece Hannah was working in Friedrichshafen in Germany as part of her degree course. Hannah was studying German & Russian languages at Durham University.
In January 2013, I had a "long" weekend plus some annual leave I needed to take, and so I planned a short break. Conveniently Monarch Airlines operate flights from London Gatwick to Friedrichshafen. I had an early start on the Saturday 12th and set off from Calcot by National Express Coaches to Gatwick, which arrived in good time for the 07.30 flight, which arrived Friedrichshafen about 10am local time. The airport is close to the railway and in about 10 minutes after walking to the station I was able to catch a train to Friedrichshafen Stadt station. I met Hannah outside the station, and she showed me around the city, including a leafy park which has many statues. 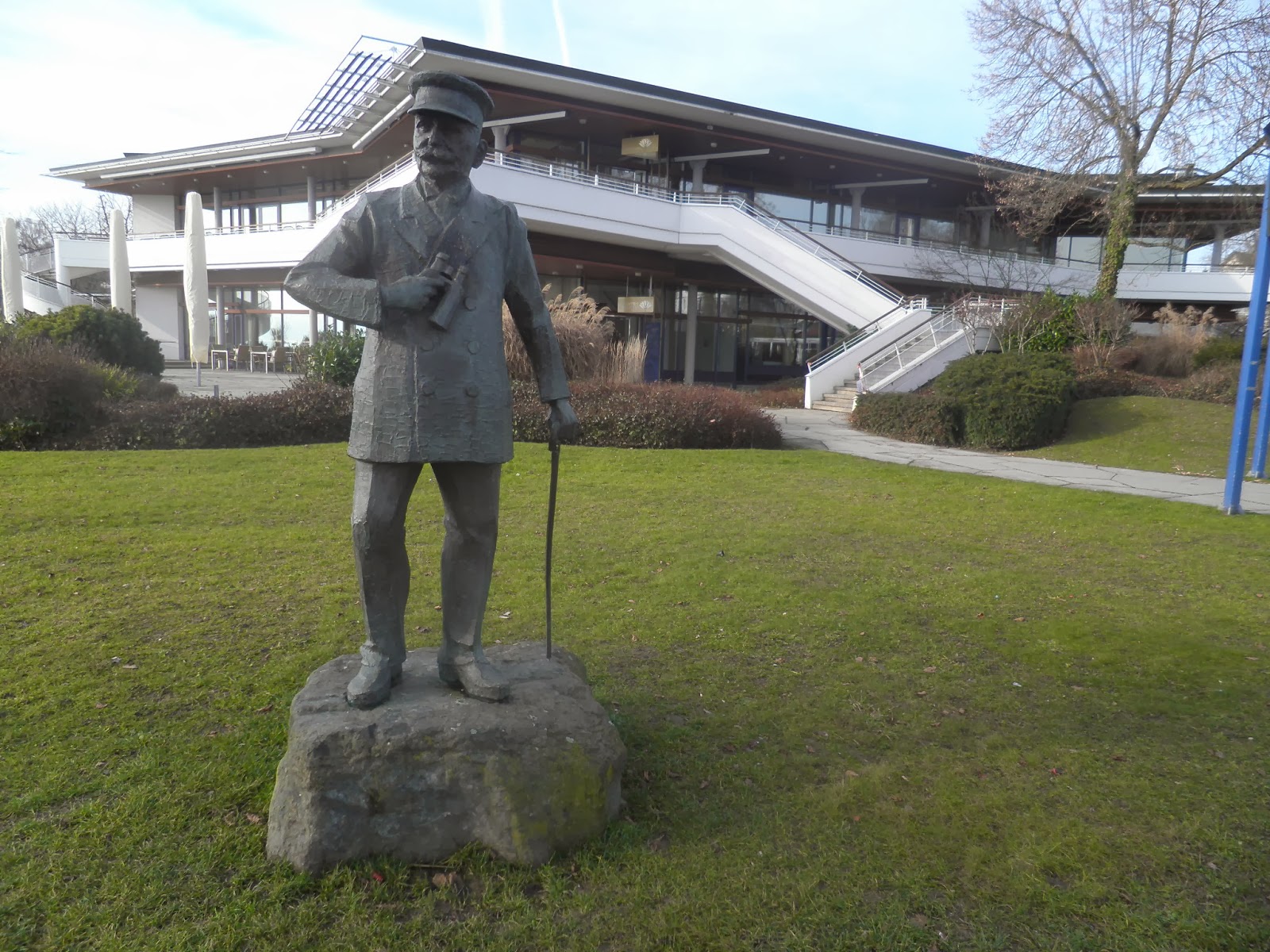 We walked to the Schlossturm (Castle tower) & returned to climbed an observation tower by the harbour from which we saw the lake (Constance) Switzerland & Austria on the other side. As the sun was shining, we sat outside and had our lunch and drinks (cauliflower & celery soup & passion-fruit juice) from the "Kaffee, Wein, Brot" cafe (one of the many bars and cafe on the harbour-side) After lunch we took a local bus to Landradsampt (called in at Hannah's flat after shopping at a local supermarket), and then a bus to Meersburg, a quaint lake-side village with a castle & half-timbered houses. We visited one of the cafes which overlook the lake & served tea and cakes. On the lake-side there is a "Magic pillar" 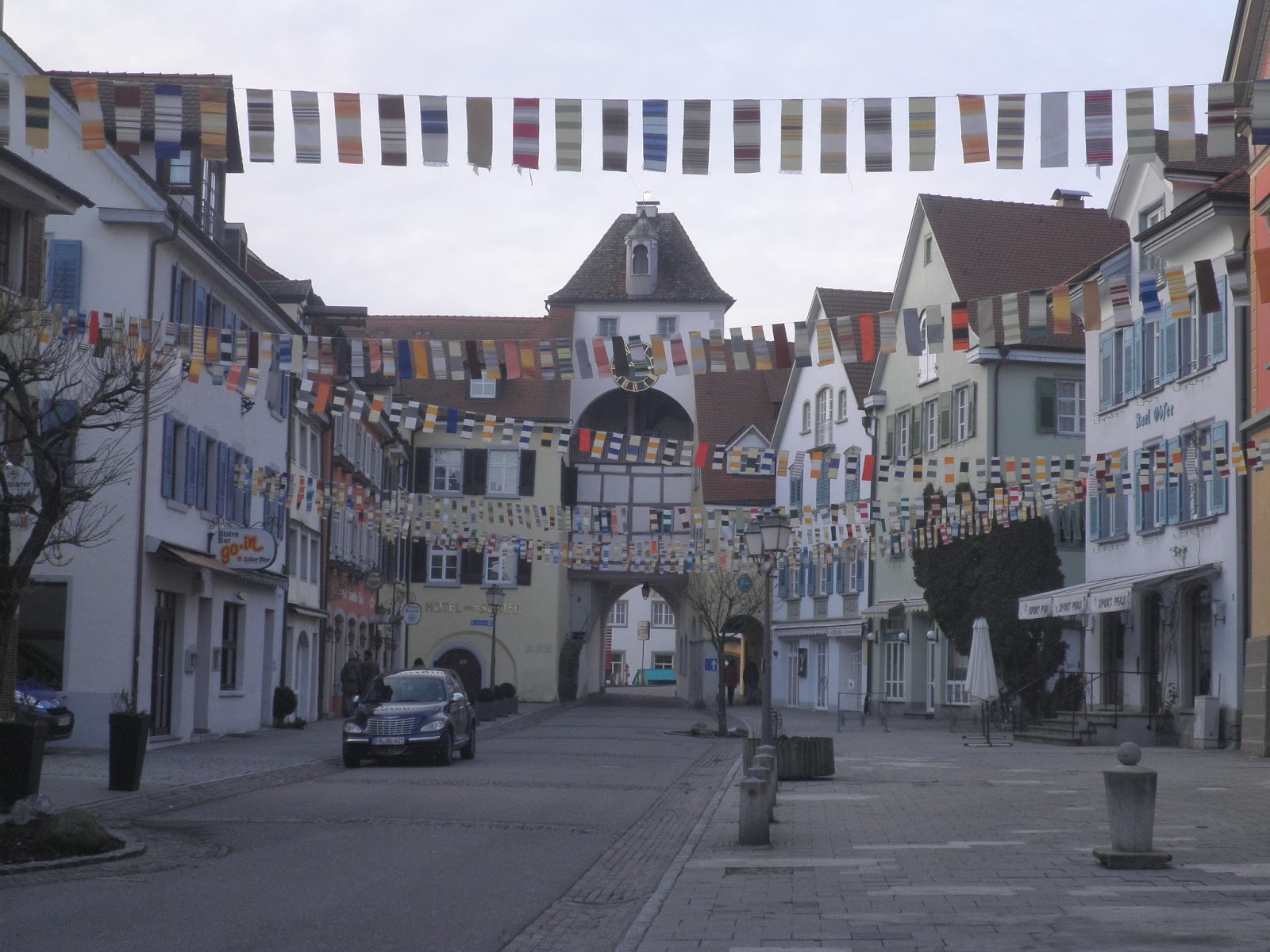 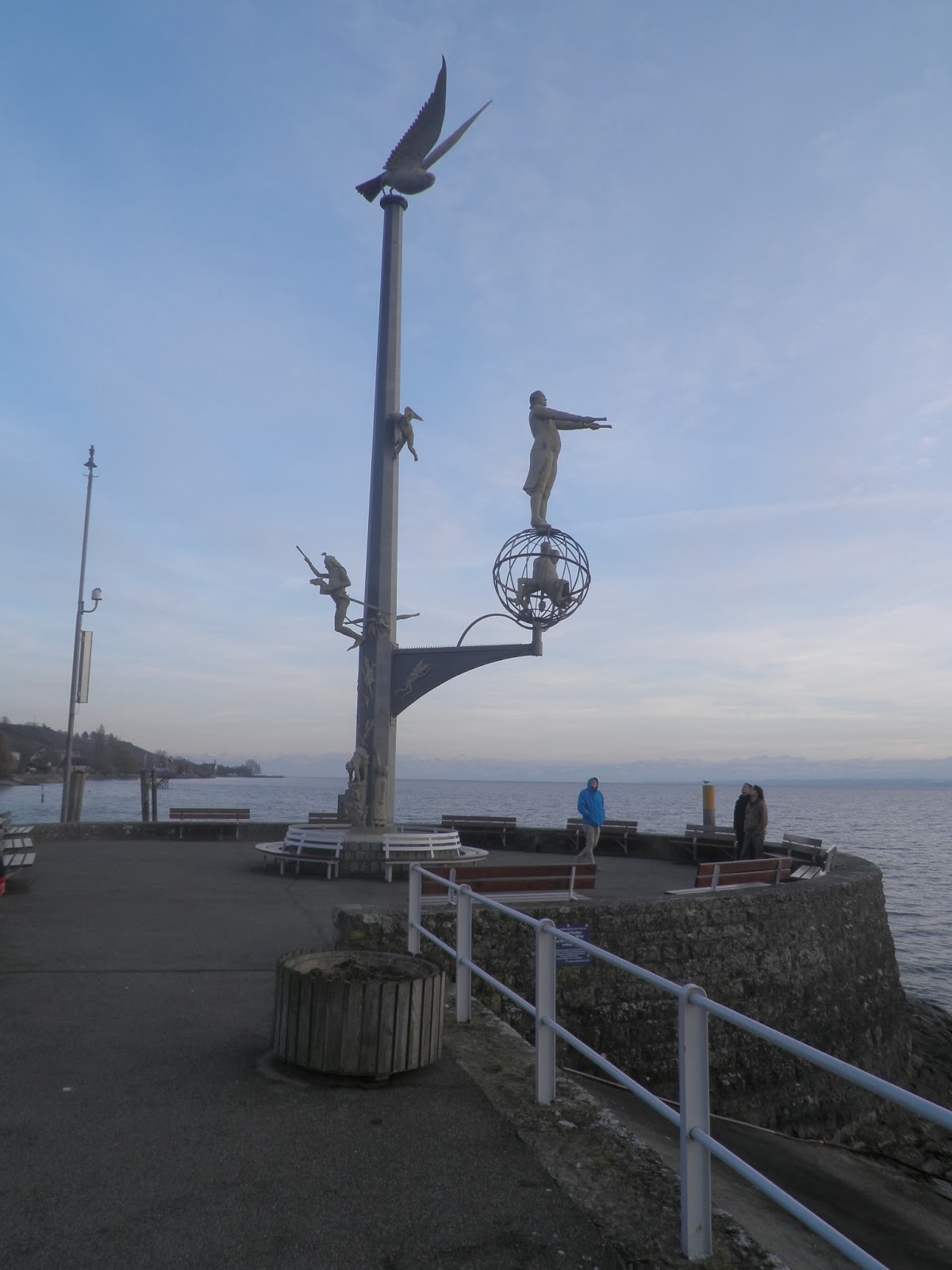 As the darkness started falling on us we took a bus from the Ferry point back to Landradsampt, and we had supper at Hannah's flat, I also met some of her friends. We had risotto. Hannah & I took the train to "Ost" (East) station & we found the DJH Hostel, where I checked in and after to a young couple I had an early night.
Posted by Jon at 20:40 No comments: