During our stay in Bosnia & Herzegovina, we felt we should visit Srebrenica, a small city in North East Bosnia, the reason being paying respect to the people who died during the 1992-95 "war" in Bosnia. I feel part of my travel experiences should include places/sites where sad but important events occurred.

In the former Yugoslavia and before 1914 Srebrenica (meaning "Silver Mine"), was a prosperous town. It was a centre for mining minerals, including silver, and because of minerals in the waters, it then became a popular spa town.

However due to the 1990's war Srebrenica was destroyed, so our visit was poignant .

To reach Srebrenica we needed to catch a bus from Sarajevo bus station at about 7.10am, we took a tram from Vijecnica at 06.15. The bus station served coffee and other refreshments. The journey took us into the mountains where snow had fallen, and we stopped for a comfort break in Olovo, at a motel with a small shop.

At 11.15 we arrived in Srebrenica, and at first we thought there was nothing here to see, everywhere looked shut, the weather was cold and wet, but we found a restaurant, which although appeared to be closed, was opened by the owners for us. We were invited to join in for lunch and a beer, and were offered a delicious meal of home-made chicken soup, cevepacci with onions and bread. We finished with a freshly cooked pancakes/fruit.

After lunch we took a walk to the main street, meeting/talking with local people, and looking at homes which were being rebuilt, and also a rebuilt mosque.

At about 16.00 we needed to head for the bus station, but as the bus driver who had been on his break, recognised us and allowed us to board the bus at the place he was parked.

The journey back to Sarajevo passed through the same mountainous scenery, we arrived back about 20.15, although we had no comfort stop.

We took a tram back to Bascarsija, and had our supper with an excellent red wine, cappuccino and Bosnian cakes in the Bosanska Kuca as this was our final evening in Sarajevo.

http://www.srebrenica-opstina.org/?i18n=en (this refers to the official website for Srebrenica) 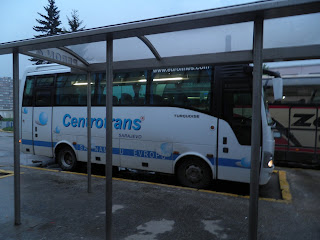 The photo is of the bus we took, at the end of our journey in Sarajevo, we felt the driver had been very helpful to us, and although he spoke no English he still helped us with our journey.
Posted by Jon at 15:56