We had stayed two nights in the Postillippo hostel, but the experience we had had wasn't good, as there didn't seem to be anyone to talk to, nowhere to make coffee, and no open reception.

We took our luggage to the Lion Pension.The day was sunny, and before we checked in we had a Nescafe Vanilla coffee and a fresh cold meat/salad platter at the Kuca Bosanska.  The friendly and helpful receptionist called Mona, also had a friend called Samra Kondo. Samra is a tourist guide, and we had arranged to meet Samra for a walking tour of Sarajevo. We started at the Inat Kuca (Spite House) on the opposite bank of the Milijacka river, the history about this house (now a restaurant) is that when the Austro-Hungarians decided to flood the ar ea, the owner of this house insisted it was moved brick by brick! From outside the main library (Vijecnica) we walked down Kazandziluk (coppersmith alley), and Saraci /Ferhadija (the main artery in Bascarsija) where there is a Caravansaraj (an area where travellers are allowed to stay in rooms, while their horses are fed/stabled). The caravansaraj is now a cultural/community centre. We passed and visited the Serbian orthodox church, Saborne Krkva, inside there is a museum of Orthodoxity. The same street leads to an area with very different architecture, the type typical to cities of the Austro-Hungarian Empire, where we visited the Roman catholic cathedral and Novi Hram (Synagogue). Our tour included four different places of worship, we saw two mosques, Begova Dzamija (Gazi Hubrevi Bey's mosque) and next to the Serbij Fountain there is the Dzamija Havadze Duraka, where the "call to prayer" is still carried out live from the minaret  (rather than a recording through a loud speaker).

After seeing these places of worship we visited the Latin Bridge (Latinska Cuprija) the place where Archduke Franz Ferdinand and his wife Sofia were assassinated (the event kickstarted the first world war). On the same corner, there is a museum dedicated to the period.

We also visited two houses, an 18th century Ottoman nobleman's home (Svrzina kuca), which is now a museum, and features the style of Ottoman's homes. The other nobleman's house included the period when the Austro-Hungarians ruled Sarajevo, and from a rather humble beginning, the building included a theatre room, and "devoted" rooms, Ottoman houses the rooms are multi purpose, the sofas can become beds, etc.

After our walking tour Liz and I returned to spend the afternoon, exploring Sarajevo (Bascarsija) we visited the Post office, a CD shop and ended with an evening meal at the Bosanska Kuca in Bradadziluk. 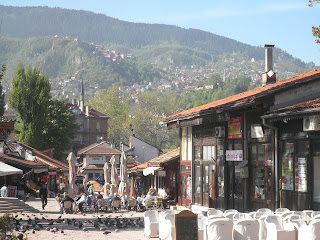 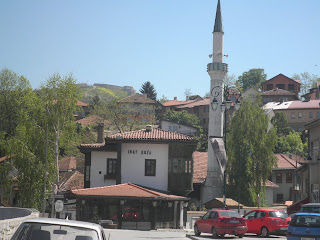 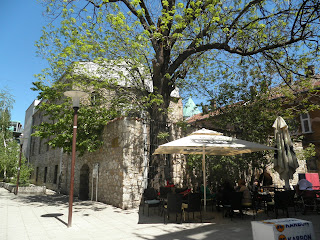 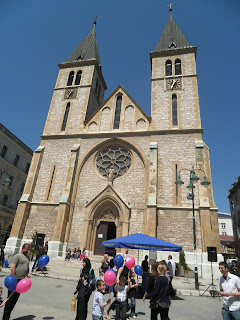 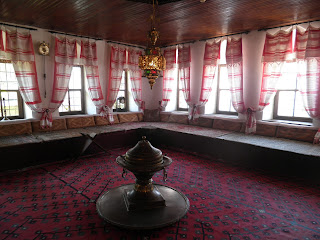